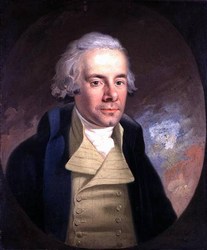 William Wilberforce of Hull, England, was a devoted student of the New Testament and a devout layperson. He was educated at Cambridge University and traveled widely. A deep concern for the Lord"s work led Wilberforce to the “brink of Holy Orders.” However, under the influence of John Newton, he decided that he could better serve Christ as a politician. For more than fifty years, Wilberforce served the church, his country, and the world as a Member of Parliament and an eloquent spokesman for Christian values and ethics. He is probably best remembered for his efforts to end slavery in the British Empire. The crowning achievement of his legislative career, the Emancipation Act of 1833, was passed one month after his death. He also championed the causes of Catholic Emancipation in the British Isles, of English missions in India, of parliamentary reform, and of judicial and prison reform. He wrote A Practical View of the Prevailing Religious System of Professed Christians, which was widely read both in England and continental Europe, and which significantly influenced religious and political thinking in his day. May we also, like William, defend the poor and liberate the oppressed. Amen.

Let your continual mercy, O Lord, kindle in your Church the never-failing gift of love, that, following the example of your servant William Wilberforce, we may have grace to defend the poor, and maintain the cause of those who have no helper; for the sake of him who gave his life for us, your Son our Savior Jesus Christ, who lives and reigns with you and the Holy Spirit, one God, now and for ever. Amen.