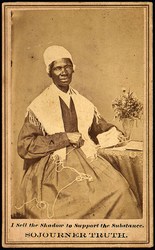 Today the church celebrates the witness of four courageous women who in the nineteenth century blazed the trail for equal rights and human dignity for all people regardless of race or gender. All four were deeply religious Christians who acted out of response to the gospel of Jesus Christ and the teaching of Paul that in Christ “there is neither Jew nor Greek, slave nor free, male nor female.” Elizabeth Cady Stanton led in the organization of America"s first Women"s Rights Convention in 1848. She was a dynamic speaker and traveled throughout the nation speaking wherever she could against the oppression of women and the enslavement of African Americans. Amelia Jenks Bloomer was a leader in the antislavery, women"s rights, and temperance movements. She was also a popular public speaker and she published a newspaper, The Lily. A native of New York, later in life she moved to Council Bluffs, Iowa, where she worked to establish a church, a library, and a school. Isabella Sojourner Truth escaped from the slavery into which she was born, settled in New York City, became a street preacher, and opened a shelter for homeless women. She was six feet tall, had a powerful voice, and became a traveling evangelist and one of the most popular speakers on the abolitionist and women"s rights circuits. Harriet Ross Tubman was born a slave on a Maryland plantation but escaped to Pennsylvania and freedom. She led more than three hundred slaves to freedom via the Underground Railroad in the decade before the Civil War. During that war she once led a unit of black troops on a raid which freed more than seven hundred slaves. Kindle in our hearts a zeal for justice and on our lips a voice for freedom. Amen.

O God, whose Spirit guides us into all truth and makes us free: Strengthen and sustain us as you did your servants Elizabeth, Amelia, Sojourner and Harriet. Give us vision and courage to stand against oppression and injustice and all that works against the glorious liberty to which you call all your children; through Jesus Christ our Savior, who lives and reigns with you and the Holy Spirit, one God, for ever and ever. Amen.