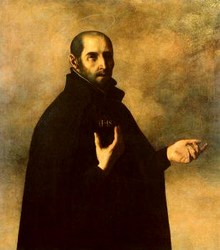 Today the church remembers Ignatius of Loyola, Priest and Monastic, 1556.

Ignatius of Loyola died in the plain small room that was both his bedroom and chapel. Soldier, scholar, priest, and most of all a man of prayer, Ignatius first turned to God seriously while convalescing from battle wounds. He put together a notebook which eventually became the Spiritual Exercises, a work that would change the lives of many after him. When he recovered from his injuries he went to the great monastery at Montserrat in Catalonia where he hung up his sword at Our Lady"s altar and exchanged his officer"s uniform for the clothes of a beggar. He went to the University of Paris to study for the priesthood and, together with six companions, took vows of strict poverty and service to the poor. This became the Society of Jesus, the Jesuits. Ignatius made a pilgrimage to Rome, and in 1540 the Society was solemnly sanctioned by the Pope. Ignatius was made its first General. Most of the rest of his life was spent in the service of the Society which vigorously undertook the conversion of the newly discovered pagans of Africa, Asia, and America. The Society struggled to reform the church from within and to fight heresy without. The Society of Jesus was suppressed by the Pope in 1773, but was restored in 1814. It exists to this day, a significant influence in the Roman Catholic world. Help us to use our wealth for your purposes, O Christ, and may our generosity be a blessing to us and to others. Amen.

Almighty God, from whom all good things come: You called Ignatius of Loyola to the service of your Divine Majesty and to find you in all things. Inspired by his example and strengthened by his companionship, may we labor without counting the cost and seek no reward other than knowing that we do your will; through Jesus Christ our Savior, who lives and reigns with you and the Holy Spirit, now and for ever. Amen.